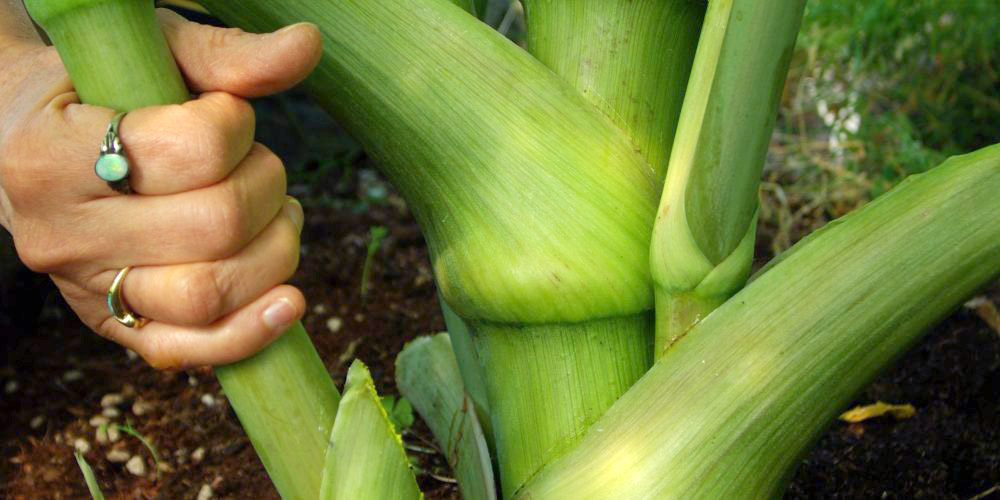 *Reiso, “A mysterious or mystical herb or plant.”

According to ancient documents, [1] the gene-center of Ashitaba is Hachijojima, an island in the Izu archipelago, a moist subtropical region located southerly to Japan. This island is well-known as the “Island of Longevity.”  Historically, inhabitants consumed an austere diet composed of assorted grains, seaweeds, fish and the edible, golden-sapped Angelica-like plant known as Ashitaba.

“… if you eat Ashita-kusa as a regular diet, (it will make) millet sake taste like high quality sake of famous brand.  Think over deeply.”

“Because there is not enough to eat for islanders … people stave off hunger by eating hama-ashita.”

“Hachijo-sou (Ashitaba) used as medicine for smallpox, or incantatory herb against smallpox.”

“Efficacy of this herb is longevity.  Medicine for kidney, and … ease of delivery.”

“Hardly any sick among islanders … no one who is blind among ten thousand people, and   people who are smitten by paralysis and gout are rare as well.”

This lovely biennial and monocarpic plant thrives in our greenhouses, giving me the opportunity to personally consume the fresh stems rather frequently.  I believe that this practice has a positive gastric effect–improves digestion by stimulating the liver (bitter), provides energy by way of diverse nutrients (cholorophyll and micronutrients), protects against pathogens (chalcones), and is also very high in gut-scouring fiber.

I first met the plant in Yunnan in the year 2007 when I was shown a single specimen growing mightily in the shade of a kiwi lattice. The seeds had been exported from Japan to China and the plant was being studied at a local university.  A professor sold me a small packet of seeds which proved to be from the standard green-stemmed variety–Angelica keiskei Koidzumi.  He also empowered me with the germination mantra, which I have used successfully ever since:  “30 days cold/moist refrigeration, surface sow warm, germ in 15 days.”

His seeds served as starter material for me, seeds that germinated readily when I put the aforementioned mantra to practice.  General interest in Ashitaba soon burgeoned, and I had to increase production.  I developed deep, nutrient-rich beds to produce the largest plants right in the greenhouse, thereby protecting them from our cold, mountain nights.  In the second year, large mother plants produced heavy umbels of radiating clusters of mussel-shaped, greenish seeds.   These we harvested and planted assiduously, yet it was hard to keep seedlings in stock–they sold fast to other growers.

The bioactive components of Ashitaba include prenylated chalcones, linear and angular coumarins and flavones.[3] Chalcones in Ashitaba have been shown in-vitro to possess chemopreventive, antidiabetic, antibacterial, anti-inflammatory and anxiolytic properties.  The coumarins isolated from ashitaba have been shown to possess anti-inflammatory, chemopreventive, antidiabetic and antiobesity properties.  The flavones contribute to the chemopreventive effects.  The entire plant, or ethanolic extracts from it, have been shown in clinical studies and in private usage to be antidiabetic,  antiobesity and anti-tuberculosis.[4] In a recent study, plants grown by the author were extracted and subjected to bioassay-guided fractionation, in order to isolate active compounds and test them against common pathogens (Methacyllin-resistant staphylococcus = MRSA).  Seven third-stage fractions, including a pure compound  (xanthoangelol )  not previously reported, showed more potent MRSA activity than the reference antibiotic chloramphenicol . [5] [6]

Despite the convincing historical support for consuming the plant in the fresh or vegetable state, a culture of Ashitaba tea enthusiasts has sprouted up.  Hot water is mixed with the green-gold powder of dried leaf and stem, stirred and drunk thick.  To make the powder, slice the stems and leaves thinly and dry on paper in a warm, well-ventilated area.  Turn the pieces to afford even dehydration.  When crispy dry, grind thoroughly, then sift out the larger bits, storing the fine, green-gold powder in a light-proof glass receptacle with a tight-fitting lid.

Botanical medicines related to life-extension, as a matter of course, tend to work best when used in whole plant or whole plant extract form, taken over time and with consistency.  Ashitaba has wide-ranging activity, and may be used as a wellness-supplement for anyone desiring better digestion and resistance against common pathogens.  Most notably for high-risk individuals suffering from overweight, diabetes, tuberculosis, cancer or MRSA, when made part of the daily intake, the herb  may be expected to contribute to the healing.  Long live those who take Ashitaba.  Long live Ashitaba!