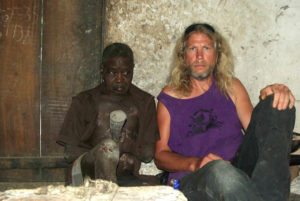 “Leta mukasi!” says the witch doctor living on the northern tip of the island of Pemba in Zanzibar.  “Bring mukasi!” His hand rests on the distended abdomen of a little boy who complains of stomach pains, a common complaint in a tropical region where food supplies are seasonal and parasites know no winter.  The plant is Leonotis mollissima, a white-flowered wilde dagga that grows on the islands and mainland of East and South Africa.

The plant is mildly bitter, antidiarrheal and antiparasitic.  How does the witch doctor know to use it?  Because his father used it, and his father before that.  He knows it works by dint of practical application.  The use of mukasi is accompanied by supportive therapies–massage and incantation, all within a framework of faith.  The name of the plant might seem to be inconsequential to its application in healing therapy, but in actuality the name is important to the therapy. The plant that is required is this plant and none other.  The apprentice knows this, and brings the right plant, which is of course very important! 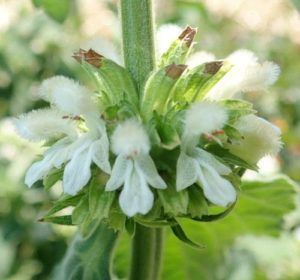 Knowing the name gives one access to the power of the plant.  If you’re walking down the street in a crowd and somebody shouts “Hey you,” you might not turn around, but if they shout your name, you’re likely to turn around!  This is a demonstration of the power of naming. The meaning of the Latin name of mukasi (Leonotis mollissima) is “Lion’s Tail, Soft.” The plant is in the Leonotis (Lion’s tail) genus and is much softer to the touch than the more widely-known and spiny Wilde Dagga (Leonotis leonurus).  The Swahili name mukasi has no complex origin.  It means, intrinsically, this plant.  In a culture where plants are premier, where instead of going to the market to buy string one goes to the baobab tree and strips a bit of bark, in a culture where the cotton tree provides the chinking that keeps the boat from sinking, well, plants are extremely important, and as such they tend to have their own names.

So, we have two different kinds of naming.  One is the descriptive name, and the other is the intrinsic name.  Take for instance the seed of the oak tree.  We could call it descriptively “The nut of the oak,” but instead we call it “acorn,” which has no other meaning in modern English.  This is because the acorn is important enough to us to have earned its own unique name.  “Mighty oaks from little acorns grow” is more meaningful than “Mighty oaks from little oak seeds grow,” and in this dichotomy lies the crux of the power of naming that shapes culture.  When the witch doctor names “mukasi,” he invokes the spirit of that plant, the life force, the medicinal activity, the connection. Let us all learn the true names of the plants, and use them with respect to the roots of our culture, bringing us closer to the heart of nature.

4 thoughts on “The Power of Naming in the Plant World”