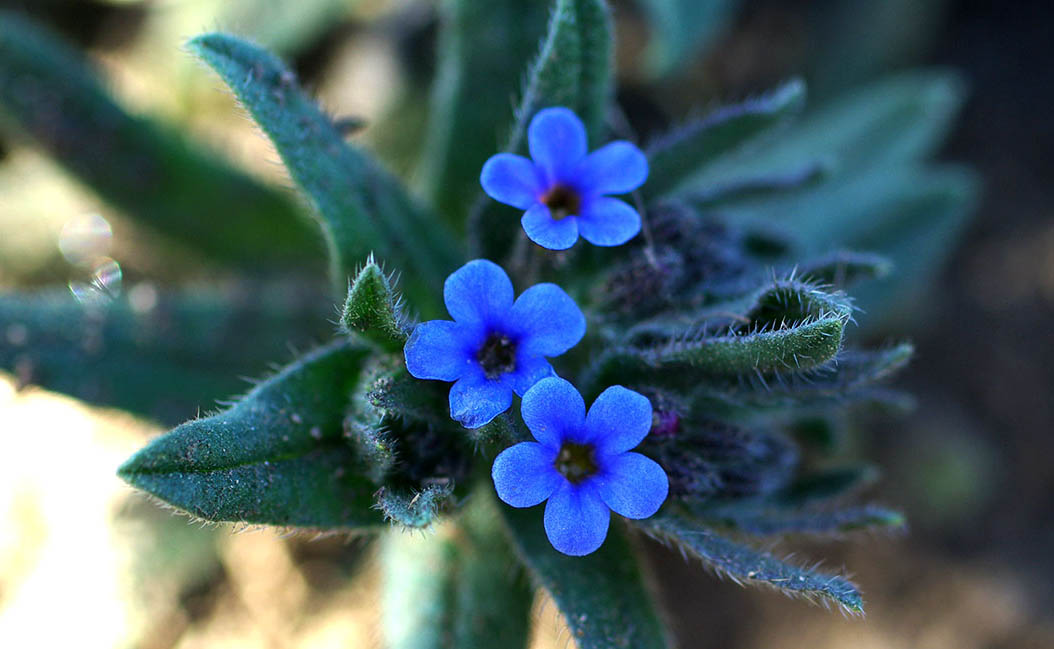 Before me stood two test-tubes, one full of olive oil, the other containing pure grain alcohol.  I dropped a fragment of Alkanet (Alkanna tinctoria) root into each, and watched as the fragments drifted down, trailing in each case a tail of bright red pigment, like barnstorming biplanes emitting colored smoke at a county fair, eliciting excited “ahs” from a corndog fueled crowd.  In the case of my roots, this magical pigment, these  anthraquinone constituents known as alkannin and shikonin, trailing down through my test-tubes, were now shown to be soluble both in alcohol and oil.  Not only was I perceiving the solubility of a famous red pigment, but also the infusion of a medicinal agent demonstrating a multitude of synergistic activities — preservative, antiinflammatory, bacteriostatic. . . The list of activities was impressive, and the uses for salve and tincture, for lip-balm and dyestuffs — nearly boundless.

My story really starts with a man, a one-of-a-kind old-school seedsman named Henry Andre’, who lived (lives?) in the village of Etraye, in the northeast of France.  During the 1980’s, and well into the 2000’s, Sir Henry (and this was what he called himself, due either to his archaic English or perhaps because he was knighted, I never found out which) and I performed a complex communication by way of long handwritten letters, letters that delved into the rare seed trade and lead to shipments of seeds flying in envelopes across the Atlantic, both in an easterly and a westerly direction, supplying the wants of either party — Borages, Echinaceas, Cucurbits and more.  Sir Henry was a knight much as described by Chaucer

That from the tyme that he first bigan

To ryden out, he loved chivalrye,

Trouthe and honour, fredom and curteisye. . .

I would add to that — curiosity.  The man could unearth secret seeds like no other.  I often  imagined him sitting, his gaunt frame perched on a wooden chair, in a garret, surrounded by seed packets carefully marked in French cursive, a kerosene lantern providing light for his writing table as well as warmth for a neat array of germination tests, seeds placed between stacks of  blotters, labels protruding.  He would replenish the moisture of the blotters with a spare trickle of water from a stained wine glass.  His hands, enclosed in woolen gloves with the fingertips cut out, fingers stained with blue ink, would tremble slightly as he dribbled.  Sir Henry corresponded extensively in several languages in handwritten letters carefully folded into airmail envelopes addressed and stamped with great precision.  He always crossed out his return address in fear that it might be misinterpreted as the primary address.  He cared nothing for rules that prohibited harvest and dissemination of seeds, kept perfect track of postage rates ( if I used postage in excess, he would always bring this to my attention), trusted no-one,  and judged harshly any perceived chicaneries in the seed trade.  It was from him I learned the potency of the word “true.”  Alkanna tinctoria was named by him “True Alkanet” to differentiate it from look-alikes and other mislabeled Boraginacea that were passed off by traders as “Alkanet” simply because the name sold seeds.  To Sir Henry, there was only one True Alkanet, and this was the small, blue-flowered, mounding and creeping plant Alkanna tinctoria, a plant that was becoming extremely scarce due to overharvest for the natural dye industry.  In the south of France, along the shores of the Mediterranean, a few wild patches still existed, hidden from prospectors, protected and wild-gardened by a woman we’ll call Marie.  If I played my cards right, and stayed on Sir Henry’s good side, and was extremely patient, Marie would, for a small fee, collect wild seeds of True Alkanet and send them to Henry, and he would then forward them to me (you can be sure with exacting  postage attached).  This was a time when the USDA  freely allowed small samples of valuable botanicals to cross borders unimpeded, and a time when France was the most congenial to seed trade of all countries in Europe.

Had I only known the value of the ten grams of Alkanna tinctoria seed that arrived to me in the year 1988, I would have started more plants and made a more diverse patch.  But seed trade was heating up, so the seeds were sold out to various growers worldwide.  With the remaining seed I started only a few plants, which I put to the field in places where the sun was full, the drainage good, and the sprinklers not overly zealous.  From time to time I’d stride out and whack back the surrounding weeds with a shovel and then perhaps side-dress the developing plants with sand, or painstakingly pick out plantains or other weeds that came up close to the crowns.  So tended, the Alkanet patches prospered, overwintered, and the next year produced multitudes of flowers.  These were colored pure blue, resembling robin’s egg blue, a color found in the lantern of a deep-sea fish, or the color projected from a neon sign pulsing out from a rain-soaked dockside window of a tavern called “the midnight cocktail.”  It is a blue so deep as to make Crayola jealous.  After the flowers died back, and made promising-looking seedpods all along the stalk, I would gently squeeze to determine the development of seeds, but was often disappointed to find the seed heads inflated but empty.  Despite the myriads of flowers and the activities of gnats and other pollinators, the seed production from these domesticated Alkanna tinctoria was sparse.  I imagined Maria must have had an easier time of it.  In the year 2008 my records show a harvest of 30 grams of the beige, meerschaum-pipe-shaped seeds (see illustration) and that was the peak production to date.

By the year 2018, I was down to one plant.  My questing fingertips detected in a single season exactly one seed.  At this point I realized that unlike other members of the Boraginacea, Alkanna tinctoria is not self-fertile, being instead an obligatory breeder, requiring cross-pollination with a plant of the same genus and species but from different parentage in order to make seed.  Furthermore, this one remaining  plant was needed by scientists who would be testing the anti-staph activity of the red pigments.  Another plant sacrificed on the altar of science!  I still couldn’t bring myself to dig the whole thing, so bisected it, hoping that the remaining portion would live on. It did not.  I pulled the vestigial roots from the ground, washed them and dried them as a sample.  Later, I ground them into a fine red powder and used this to make my Christmas salve (Olive Oil, Comfrey root, Calendula flowers, Myrrh resin, Alkanet, Beeswax).  The salve attained a fine golden color.  No wonder the world wanted Alkanet.  Superb!

The next year, I kept an eye on the spot where the Alkanet had died, and kept it weeded and bare.  To my great relief one tiny self-seedling that I identified as Alkanna tinctoria volunteered.  Not only did I stake the new plant, I literally surrounded it by stakes!  The seedling took, and by late summer the pure blue of Alkanet flowers again blinked up at the Oregon skies. However, the location was not ideal.  The spot was too close to a sprinkler, and the soil too dense.  Despite my assiduous weeding and the addition of sand around the crown, by winter I knew it was time to find a new place for this remaining plant, so moved it to a deep sand bed in a tropical greenhouse.  Perhaps it wasn’t chance that caused the plant to split into four sections at transplant.  Besides these four plants, I still had some seed, which I planted.  Soon thereafter, a foot of wet snow fell on the farm.  I was glad for the cold stratification of my seeds, and felt lucky indeed to have the Alkanet plants indoors, warm and dry, and responding very well to the deep sand of the new bed.  I could see new growth coming out at the center of the crowns, so determined to cut off some of the branches.  These I stripped back and soaked briefly in willow tip tea, then planted to a sand bed in a double-bubble (propagation tent).  I thought they would wilt, but instead the cuttings really took off.  Digging one up, I found roots showing.  Another small experiment had elucidated the fact that unlike some other Borage family plants, Alkanna tinctoria can be readily propagated by stem cutting.

These days, various species of Anchusa are sold labeled as “Alkanet.” Anchusa officinalis, for instance,  makes very attractive scorpioid inflorescences of neon-purple, but the plant contains no alkannin.   Alkanna orientalis, although a superior bedding plant (and with seeds that contain a compound that does indeed kill Staphylococcus), is yellow-flowered and also contains no alkannin.  Zi-cao (Lithospermum erythrorhizon) taproots do make a little red excrescence on their outer surface, but contain only a fraction of the alkannin found in the roots of True Alkanet.  In fact, surveying all of the botanical world for something that is rich in alkannin, only one plant stands forth, and this is of course our True Alkanet (Alkanna tinctoria). And so it goes.  We’ll see where it all leads.  A quick search for images shows any number of seeds being sold as “Alkanet,” but much to Sir Henry’s chagrin, and mine, misidentification is rampant.  What is in a name?  In the case of Alkanet, a Rose of another name would not smell as sweet.  We need the true plant.

13 thoughts on “True Alkanet — The Saga”

Something satisfying about growing the old standby

Of all the aloes, Aloe dichotoma (Quiver tree) eng

The secret to overwintering white sage outside its

The other day a bumblebee in the greenhouse visite

Vaccinated or no, many of us have had covid. Herba

Now is an excellent time to repot your show plants