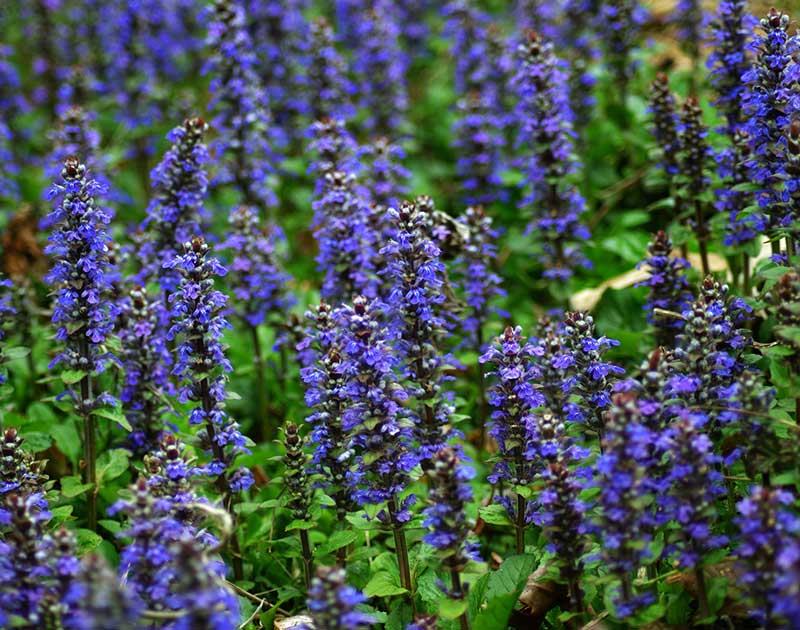 The urge to muck about and create plant habitat goes hand-in-hand with the urge to grow more and more species of plants that need individualized growing conditions.   As your species list increases, you will probably feel motivated to prepare specific plant habitats.  After all, making your plants happy is a way to spread a groundcover of happiness into yourself.

Living groundcovers can be of great benefit to the garden and the gardener.  The best ones are evergreen or at least remain trim and green for most of the year: pleasing to the eye, softening the edges of the landscape around pathways, beds and walls; discouraging weeds; preventing erosion; conserving water and nutrients, these are the many attributes of the groundcover.   Classic examples are: the Roman Chamomile lawn that dresses rich soils in full sun; Corsican Mint or Creeping Thyme grown on rocks,  over steps or between stepping stones; Rupturewort grown over rock, gravel and scree; European Speedwell or Brahmi growing in muck at the margins of the pond; Bugle or Self-Heal grown in loose mulch under trees in acidic woodlands or in moist, open meadows.  An added benefit is that each of these and other groundcovers also has medicinal use, uses as diverse as their preferred environmental niche, uses as diverse as the gardeners that choose to live with these groundcover allies.  This article will give an overview of herbal groundcovers and how to get them established, including a few notes on their medicinal uses and preferred habitats.

Site preparation and planting.  A good groundcover can be achieved only if the slate is wiped clean.  A monotypic stand cannot be achieved by sprinkling seeds into an existing lawn, grasses or weeds.  These must be removed prior to the planting of the groundcover.  Various options exist, but the general plan is to grub out the weeds and prepare a new seedbed, either by working the existing ground or by bringing in soil, sand, compost, pumice, coir and/or peat.  Although gardeners sometimes have success with direct-seeding groundcovers into a prepared seedbed, the reality is that more control gives more results.  Most groundcover species have very small, sometimes dust-like seeds, and in most cases it works better to start the plants indoors and transplant young bare-rooted or potted groundcover plants into the receptive soil.  A six-inch spacing is usually very effective–the groundcover will root in, spread and interlock.

The stepping-stone pathway is one of the most attractive places for a low-lying cover such as Creeping Thyme (Thymus serphyllum) or Corsican Mint (Mentha requienii), both of which top out at only a couple of inches.  Mark out the pathway, till or shovel out the existing soil to a depth of 4 inches, install a weed barrier (layered cardboard works fine), lay down the stepping stones, placing them directly on the weed barrier, in the desired pattern, then fill in around the stones and to the edges of the path with sterile sand.  Water it all down with a hose to compact, and fill in any holes that show up with more sand.  If you must attempt direct-seeding, then mix the very small seed in with a handful of sand to stretch it, and sprinkle this all around the rocks and tamp it in securely.   For the purpose of direct-seeding, larger amounts of seed are required–a 3 foot by 12 foot pathway will require a full gram of tiny seeds.  To start a sufficiency of seedlings indoors with an eye towards transplanting at a later time, packet quantities will suffice.  Sow the seeds on the surface of the flat, press in and keep warm and evenly moist until germination occurs.  Work up the seedlings and transplant when sufficiently sized to withstand the rigors of the pathway.

When planting groundcovers such as Creeping Thyme or Corsican Mint to the rock garden, it may be necessary  to renew the site by pulling out the rocks, removing any weeds (such as grasses that want to come up from underneath and ruin the whole thing), and lay down a new weed barrier.  Prepare spots for the groundcover to root in while replacing the stones.  Fill the interstices between the stones with sterile sand, pumice, cactus mix or potting soil.  This makes receptive ground for rock-garden species such as the many species of upright Thyme and Savory, Lady’s Mantle, Tauric Rock-Rose or the hardy succulent Sempervivum . Once the perennials are set in, they can then be surrounded by the low-lying groundcover. Creeping Rosemary is a classic choice in this context, and can be expected to drape over the rocks and produce aromatic foliage and bright flowers in season.  It takes a lot of work to prepare the rock garden, but once established, they tend to be weed-free and require little watering or other maintenance.  Rock gardens provide habitat for desired species (you may see a lizard scurry by), and vertical texture to the landscape.  Rock gardens do well situated around parkings, pergolas, buildings and draw the eye as a central focus in herbal gardens.

The Roman Chamomile (Chamaemelum nobile) lawn.  Choose a flat spot in the sun where there is easy access to water.  Yes, last year’s Carrot bed will be perfect.  Fork or till the existing soil, let rest, fork or till again, then rake out any debris, leaving friable soil of a planting bed.  Roman Chamomile seed is expensive and can be stretched by starting indoors.  Press the seed into the surface of a sandy medium .  Germination  is very rapid.  Prick the seedlings into pots (singly or in small groupings) and allow the plants to develop until roots fill the pot.  Then, transplant to the prepared site at a spacing of 6 inches between the plants.  Allow the plants to develop undisturbed (except to walk on them with bare feet, of course!) until they begin to flower.  Pick the flowers and dry them for the delightfully sedative tea, then (put on some boots and) mow back the unruly plants with a lawnmower.  Once mowed, allow the patch to rest for a day, then water.  This will make a nice, level stand (a crew cut).  Dilute fish emulsion fertilizer can be applied several times during the growing season in order to encourage lush growth.  Allow this to dissipate before taking a nap on the lawn.

The Rupturewort (Herbiaria glabra) groundcover.  This plant thrives in dry and sandy areas, and although it maintains a taproot and does not root in at the tips, a single plant has the uncanny ability to cover an extensive area (4 feet by 4 feet or more) with a consistently low-lying, bright green, cushy mat.  Rupturewort covers every crack, invites one to sit comfortably on it, and emits a delightful fragrance of sweet coumarin when this is done.  Rupturewort is widely adaptable to both temperate and desert applications.  Growers in cooler zones can pair it with Lilies, Gentian and Arnica.  Growers in warmer zones may want to try it out as a groundcover around perennial Aloes and Cacti.  Rupturewort is pretty difficult to start from seeds.  I can barely imagine anyone direct-seeding it with good effect.  The seeds are best pressed into the surface of a shallow, sand-filled flat, kept warm and in the light, and watered daily until the tiny green specks of the seedlings appear.  These may be coddled along and worked up until they are large enough to transplant, the only danger to them being rot–a fast-draining substrate is essential.  Rupturewort is not very well-known among American growers, but has been used extensively in Eastern Europe and is very much worthy of our attention.

Bugle (Ajuga reptans) and Self-Heal (Prunella vulgaris)  grow well in moist to mesic shade under trees or in riparian zones.  The plants create a central taproot and send out runners which also root in.  The midspring show of purple flowers of either species is really rather spectacular. Self-heal remains florific for a longer time period than does Bugle.  Meanwhile the plants can be relied upon to force out weeds and discourage erosion.  Bugle does best growing in leaf mulch under trees, while Self-Heal prefers moist garden or open meadow, and will cohabit nicely with grasses. As medicinal herbs, Bugle and Self-Heal rate high among the woundworts.  The leaves and flowers are full of astringent tannins that kill pain, help stop bleeding and stitch broken tissues back together.  When used as a spontaneous poultice against trailside injury, these are medicinal herbs to convince the nonbeliever!

European Speedwell  (Veronica beccabunga) lives up to its name and may be expected to quickly cover moist ground in sun or part shade, spreading faster than any other groundcover.  The plant is evergreen and edible.  One of the cleansing herbs of spring, Speedwell shows itself as soon as the snow melts, green against white.  The herb may be partaken as a pondside chaw.  In all respects, Speedwell is unremarkable but dependable, being one of the easiest and longest-lasting evergreen groundcovers.

Brahmi  (Bacopa monnieri) is a good choice for a groundcover in warm, moist zones, including the moist tropics.  I remember coming upon this herb growing in a ditch in Florida.  I knew it already as a greenhouse plant, and coming across it in habitat stopped me in my tracks.  There is something magical about that moment.  I reached out a foot and pushed down on the plant, then pulled back my foot and watched the Brahmi spring back to its original position.  In Ayurveda, the herb is used as a bitter stimulant to brain function.  Direct consumption (chewing on a small sprig of the plant) is a functional (and hassle-free) way of partaking this bitter herb.  If you’ve been stepping on it, a bit of a pre-wash might be prudent.  As a groundcover, the plant  is turgid and low-lying.  The tiny blue flowers are cheery but not spectacular.   The urge to muck about and create plant habitat goes hand-in-hand with the urge to grow more and more species of plants that need individualized growing conditions.   As your species list increases, you will probably feel motivated to prepare specific plant habitats.  After all, making your plants happy is a way to spread a groundcover of happiness into yourself.

8 thoughts on “Where and How to Grow an Herbal Groundcover”