Arnica montana (Mountain Arnica), the endemic European species, is considered official.  However, other species of Arnica (there are 28 in North America) are used by local herbalists, and appear to be medicinally interchangeable with the official species. Arnica chamissonis (Meadow Arnica) enjoys a  wide distribution in North America and Europe, and is listed in the German Commission E Monograph as a viable substitute for A. montana in herbal medicine.  Finding substitutes for the official species is a worthy goal, since populations of A. montana are declining over much of its range.  Collection of flowers for medicinal purposes is illegal in Fr

ance.  The plant is classed as “vulnerable” in Bosnia-Herzegovina, Croatia, Germany, Lithuania and Slovenia.  A. montana is variously protected in Czech Rupublic, France, Italy, and the Ukraine.  The plant is listed as “critically endangered” in Luxembourg, “threatened” in Sweden, and “extinct” in Hungary.

Collection of flowers and roots for medicinal purposes, combined with encroaching agriculture and urbanization has contributed to depopulation of the wild stands, creating shortages of the herb in commerce.  Under the circumstances, it makes sense to grow Arnica. Those living at altitude will do well to concentrate on the A. montana, which makes large flowers that are easy to pick and make lots of medicine.  Those living at lower altitudes might have better luck with A. chamissonis, which is a bit easier to grow.  Given a suitable soil and sun exposure, this plant will thrive even at sea level.

Arnica seeds respond well to standard flower seed propagation methods.  Prepare a light seeding mix that is free of lime and contains sand, forest loam and peat moss (or coir).  Press the seeds into the surface of the soil or barely cover and tamp, then keep the flat warm, in the light, and evenly moist until germination, which occurs in 1 to 3 weeks.  The seedlings will be quite small and slow growing at first.  Once they are large enough to handle, individuate into pots and tend them for up to a year before transplanting out to the garden.

Once a good patch is established, it is fairly easy to produce more plants by means of division.  Dig a rhizome, pot it up, and aerial parts will soon appear. Arnica enjoys a full sun exposure and loose, moist to mesic, acidic soils.  The plant is intolerant of lime.  Because it is rhizomatous (reproducing by way of underground creepers), it quickly populates a raised bed with a dense, monotypic stand.  We have found that amending the native soil with compost, coir, peat, and sand, making a very loose mix that can easily be penetrated by the runners, helps promote the spread of Arnica and will result in a good yield of medicinal flowers in the fall of the first year, in the summer of the second year and for years thereafter.

Harvest the flowers in early flowering stage and dry on screens in a warm, dark and well ventilated place.  Dry until crispy. 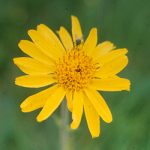 It is a good idea to use the flowers soon after drying, as they tend to get buggy in storage. Arnica is apomictic, meaning that seed formation is initiated asexually by spontaneous division of the gamete prior to the blossoming phase.  The plant does not require pollination in order to make viable seed, and every seed will produce a plant identical to the mother plant.  For the purpose of seed saving, this means that there is no need to collect seed from a minimum number of individuals, and there is no concern about hybridization with other species–the seeds you harvest will remain true and strong whether harvested from one seed head or a thousand.  So feel free to grow your Arnica and save your own seed–nature needs your help!

36 thoughts on “Info and Tips on Growing Arnica”